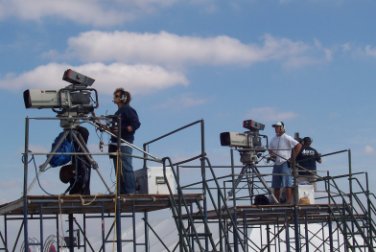 “At Channel 4 San Diego, we create our own high-definition programming that we put out to viewers of our cable channel. We not only have the exclusive TV rights to the San Diego Padres, producing 155 of their games a year, but also do a complement of other live sporting events in the winter.

When we shopped for pan/tilt heads, we needed something that could stand every-day use, and a lot of unpacking, assembling and repacking. We also use a lot of day-hires on our crews, so we wanted camera support equipment that was easy to set up and operated consistently. Those two factors led us to Vinten’s Vector pan/tilt heads.

I had looked at what other production trucks were using, and what they were happy with. We wanted to standardize on one supplier and one model, because when you’re using day-hires, if there’s even one particular device they don’t need to familiarize themselves with, the set-up is going to be a whole lot easier, a whole lot quicker. Standardizing also lets us swap heads between the trucks, and maintain a common set of spare parts.

That standardization on the Vector 70 also extends to its operational performance. We don’t assign our heads to individual camera packages, so they go out with any number of cameras with any combination of lenses, and they’re easy to balance.

For our high-definition truck, we’ve standardized on the Thomson LDK 6000 with a range of long Fujinon box-style zoom lenses. We have Ikegami HK 353’s in our SD MPU that we use exclusively for our CIF High School Football Game of the Week telecasts. The maximum payload of 154 pounds on the Vector 70 gives us a lot of cushion above the weight range of those camera packages, and even in the most extreme camera locations the +/- 60-degree tilt range lets us cover the action without hitting the tilt-stops on the head.

We can also count on the consistency of the head performance. An operator can use a different head each day, and if it’s got relatively the same camera package on it and he dials in the same counterbalance and drag settings, he’ll feel like he’s using the same head.

That goes for weather as well. With our base in San Diego you wouldn’t think cold would be an issue, but in the winter we travel the west doing our own programming and truck rentals. The Vector 70s have performed well in cold weather.
Some of our Vector 70s are five years old, and I’ve had a few of them rebuilt by Vinten. Another factor in our purchasing the Vectors is that Vinten has a repair facility on the west coast as well as back east. I’ve worked with Rick Low at their Burbank facility since I came to work with this company four and a half years ago, and even with UPS ground I can get one-day shipping. (I’ve had other equipment repaired back on the east coast, and shipping can be a real pain. You need the equipment back in service right away.)

We’re a busy operation all year around, and I have to say that at home and on the road, with things going in and out of our trucks daily, the Vinten Vector 70s are holding up very well.”

The Vector 70 has been replaced by the Vector750 pan and tilt head.