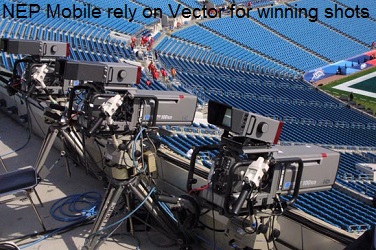 NEP CTO George Hoover pointed out why the heads have become the industry standard pan and tilt heads for hard cameras: the camera operators like them best for smooth operation.

“All of the cameramen on remote sites are generally freelancers, so they work a variety of different productions and mobile units. They can rely on the Vinten Vector heads to help them consistently get their shots.”

Hoover explained that a freelancer’s, next job is incumbent upon their performance at the current remote. “So from our perspective, we like to give them the tools that they know will let them work at their optimum creativity.”

He gave high marks to the Vector head’s wide center of gravity range, and its ability to change the counterbalance through a wide range of camera package weights without changing out cams. “It keeps the guys from having to do a science project when the director says ‘Hey, can we take that 86x1 lens and swap it with the 100x1 over here?’”

The life of OB (outside broadcast) remotes can be a brutal one, which led Hoover to comment about the environmental sealing of Vinten’s Vector heads. “They’ll be out on NASCAR, where there’s dust, a ton of track and car-related dirt. The Vector heads handle it well across the range of elements, whether it’s hot days, rainy days, or cold days.”

George Hoover is CTO for NEP and was recently named SMPTE Fellow, the organization’s highest membership level, by the Society of Motion Picture and Television Engineers.