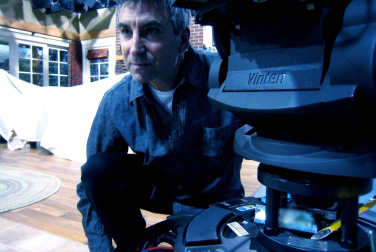 This season, I’m shooting two sitcoms, According to Jim and The Bill Engvall Show, with all Vinten camera support equipment. We have four Vinten Vector 700 Series heads on Vinten Pedestals working on each stage at the CBS Studio Center in Studio City, California. With Vinten heads, it’s almost like having a Dutch, fluid, Weaver-Steadman and gear head all in one, and not spending time (which translates to money) switching out the heads, balancing them, and figuring out what camera to use for which shot. You don’t want to waste time when you have four cameras and a live audience. You can’t hold up the funny! With the Vinten heads, not only do I almost have a four-in-one, I also have a pan and tilt head that stays perfectly balanced in whatever position the camera is left. Cameras and lenses are big these days, yet the Vinten handles the heavily- accessorized Sony F900 camera with grace and ease.

According to Jim is most ambitious. In one episode, at the climax of Jim and Courtney’s anniversary, they share a passionate make-up-from-a-fight kiss. I suggested a 360-degree move around them. That’s easy to do on a single camera shoot, but almost unheard of on multi-camera production. I gave all of our really skilled camera operators the option to do the move. Three of them said it was impossible.

Not Paul Basta. He’s the Zen-Master of multi-camera operating. He figured out the cabling, got his aerobics in order, wound up his body and uncoiled it. With a light touch from Paul, the Vinten absorbed all of the exterior turmoil as we pushed the camera out of its comfort zone around the living room, over and under yonder dale. If Paul had had to fight the head, we couldn’t have made it.

Things can get a little challenging on The Bill Engvall Show as well. In an episode where Bill and his son were playing basketball in the driveway, we had a pedestal with a Vinten head in a rig up over the goal. Corey, our camera operator, had to follow the father-son conversation as well as the arc of the ball from hands through the basket. This was not a literal “A to B to C” move. It was a slow arc and a rapid violent tilt down to catch either a miss or swish. We did an extreme shot looking straight down through a basketball hoop from a high-angle lift. It’s something that even the NBA cameras couldn’t do. They have nothing on us! And because of Vinten, we even finished early that day.

Every time I face one of these challenging moves I silently thank Vittorio Storaro’s operator Enrico Umetelli, who I met him while operating on Dick Tracy. I would see Enrico at one with the camera, making impossible moves, both vigorous and quiet, with a Vinten head.

He said he couldn’t get organic, graceful, “full of life” moves, from geared heads. I was in awe and couldn’t wait to do a show where I could use Vinten to give me as much confidence in the tricky moves as Enrico had. From the fingers on the Vinten, through the arms, to the brain – the vision is translated. The art of light and show and moving images--Grazie, Vintenissimo!

Director of Photography George Mooradian has just been nominated (for the fourth-time) for a Primetime Emmy for his multi-camera work on According to Jim. He began his career as camera operator on such features as “Dick Tracy” and moved up to DP on various features before he found a home in multi-camera.

The equipment being used on these shows was rental equipment, modified and provided by J.L. Fisher, Inc.